About the ICAP Mode

Internet Content Adaptation Protocol (ICAP) is designed to forward HTTP requests or responses to third-party processors and collect the results. In this deployment mode, the TMWS on-premises gateway acts as an ICAP server and accepts ICAP connections from an ICAP v1.0-compliant cache server (acting as a client to the gateway).

Cache servers can help reduce the overall bandwidth requirements and reduce latency by serving cached content locally. The "rectrieve once, serve many" method employed by cache servers permits integration with third-party applications such as a virus scanning through TMWS. The TMWS on-premises gateway scans and secures all content returned to the cache server and to the end-user clients.

IPv6 is not supported in this deployment mode.

A TMWS on-premises gateway deployed in ICAP Mode does not support the following:

The following network topology diagram shows an example of how to maximize the performace of a TMWS on-premises gateway in ICAP Mode. 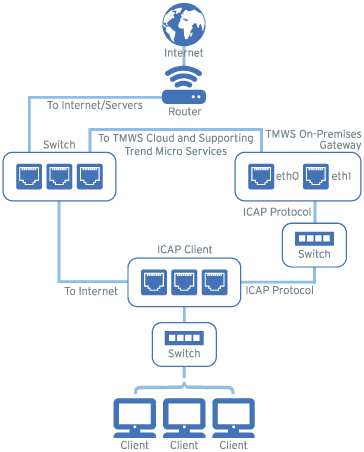